Ever wondered how Facebook suggests “People you may know” so accurately? Out of billions of registered users that Facebook has, it is a humongous task to search for the right connections. We analyze the entire network to find out features and see how two nodes (entities/people) are related, if they are friends or not?, if they have something in common?, how well are they connected to the rest of the network or a part of the network? and predict whether two nodes would connect with each other in future? And give us suggestions which we find in the “People you may know” section.

Understanding how Facebook does this analysis, can also help many large corporations to find similarity (attributes) between employees and get to know how much salary (attribute) a person should get based on salaries of other employees?, how fast an information will spread through the whole network if the information is provided to a certain node?, etc.. The study and analysis of networking will help a company grow and strengthen.

In this tutorial, I will show how to perform such an analysis. As this is an exhaustive topic, I am going to split this entire tutorial into three parts. In today’s part, I will cover the network visualization. By visualizing your company’s network, you will get a better idea about the geographical distribution of the entities and also several other attributes related to the employees.

This is what I will be talking about in the three parts:

So, let us start with the first part of network visualization. This outlines what it covers in this part 1.

First, I will describe what a social network is. I will then explain to you the need of analyzing such networks and finally the tools available to you for performing such analysis.

What is a Social Network?

A Social Network is a means to model the interaction between people in a group or community. The employees of a company form a social network, the users of Facebook is another kind of social network. The networks we create in software to represent such groups are called social networks. We can represent them as graphs for analysis and studies. Such networks are typically dynamic as new vertices and edges are added/deleted to the graph frequently. Though because of this dynamics, analysis becomes complicated it helps businesses in gaining contacts, clients, and increased public awareness. A strong and expansive network gives you insight into trends and insider information on job openings and movement within the company. These days social media makes it easier than ever to hone your existing relationships and make new contacts. Thus, social networks are a hub of information of various kinds of people. There are several social networking platforms like Facebook, Twitter, Instagram, LinkedIn, and so on. Large companies can create their own social networks.

What is Social Network Analysis?

“Social network analysis [SNA] is the mapping and measuring of relationships and flows between people, groups, organizations, computers, URLs, and other connected information/knowledge entities.” - Orgnet

We make a network up of two things, nodes and edges. Nodes are the people in a network, and the edges are the links between two nodes. By creating graphs and studying them along with visualization can reveal many important features like criminal links, social links, potential feuds, etc. For corporation networks, we also refer SNA as Organizational Network Analysis (ONA). ONA works like SNA, but at an organisational level.

“ONA can provide an x-ray into the inner workings of an organization—a powerful means of making invisible patterns of information flow and collaboration in strategically important groups visible.” - Professor Rob Cross

What tools we will use?

We use NetworkX library for network analysis. NetworkX is a python library used to study networks/graphs. It has many useful functions which can create, analyse, visualise, explore unique attributes and get an idea of the nodes and edges and the entire network overall. It can find transitivity (tendency of friends of friends to be friends and enemies of enemies to be enemies), reciprocity (if two nodes in an undirected graph can reach each other no matter the starting node), preferential attachment (popularity of a node in the network), degree centrality (the number of nodes a node connects to), betweenness centrality (the number of nodes that have to pass through a node to get to another node), and many more. We will calculate all the similarity measures using NetworkX.

Note - I’ll sometimes be saying edges and node pairs. Please understand these are the same, a particular node pair denotes the edge between them.

In this project, we will use the Facebook dataset provided by SNAP (Stanford Network Analysis Project). SNAP provides datasets for many social networking platforms. We can download the dataset from the SNAP site.

Here is the brief Information about the data: 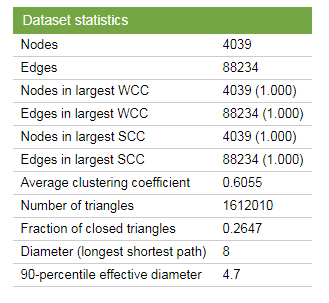 They provide the following files as part of the download.

The facebook.tar.gz has 50 items, some of which are : 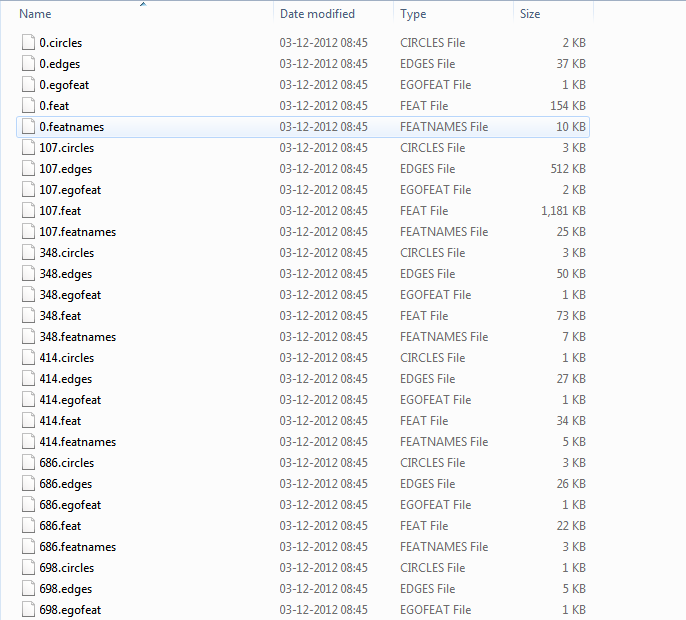 You can read the description on these files in the Standford's download site.

Import the required libraries into your project:

Download the data into your project using wget command and unzip its contents.

As mentioned earlier facebook_combined.txt contains the existing edges list. So we are going to import it and put it into pandas dataframe and name it ‘fb’. 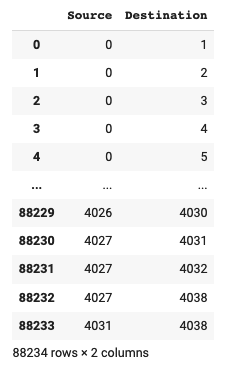 Next, we will get the information on the features of each node.

They store the feature names in the files with extension ‘.featnames’. The examples are ‘0.featnames’ and ‘107.featnames’; you will find these files in the facebook folder of your downloaded dataset. To examine the contents of one such file, let us read a file and print its contents: 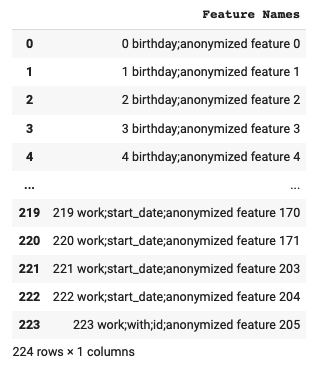 As you can see, there are 224 features; it represents each feature as number, name and type, with fields separated by a semicolon. All feature types are prefixed with “anonymized feature”.

You can also check how many unique features are there in this file (0.featnames) using the following code:

We need to extract only the name from the column value string and also need to merge the feature names from all .featnames files. For this, we will define a function:

The .featnames files in our dataset have the following indexes:

These files contain information features for 4000+ nodes. The dataset creator has given different extensions, for example, the file with index 0 has extensions ‘0.feat’, ‘0.featnames’, ‘0.egofeat’, ‘0.circles’, ‘0.edges’. We will use only the file extensions ‘.feat’ and ‘.featnames’. We will extract only the location and education, school features for our dataset. We create the merged feature list using the following code:

A node might have over one value for education school feature, we will use only the last/recent one. Also, we will ignore all the nodes having only one feature. The following code segment builds this nested dictionary.

You may print a few records to see how the dictionary looks like:

We will now clean up our fb dataframe, which is the one we are going to use ultimately for network visualization.

As we have picked up only two features, location and education:school, the dictionary node_attributes might not have all the nodes present in the fb dataframe. Thus, we need to drop all the extra edges in fb.

We now create a list of edges. We create this list of node pair tuples from the fb dataframe:

You may examine the contents of the list by printing a few records:

From the output you can see that node 2 connects to three nodes 116, 226, and 326. Each of these nodes will have only two attributes, location and education. So, we now have a cleaned-up dataset ready for constructing a network graph.

Let’s create a graph, and add nodes and edges to it using NetworkX library.

As you can see, we have 1447 nodes with 18376 edges. The average degree is 25.53. A degree shows the number of edges coming out of a node. Some of the nodes may have a small degree. To avoid cluttering in the visualization, we will drop all nodes with degree less than three.

Finally, we will construct a new dataframe for plotting from the above graph. 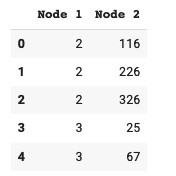 We are now all set for visualizing the network.

In circular layout, we place all nodes on the circumference of a circle. The connections from each node to other connected nodes are indicated by the lines connecting those points. This helps in showing the density distribution of the connections and the distance between the connecting nodes. We plot the layout using the following code: 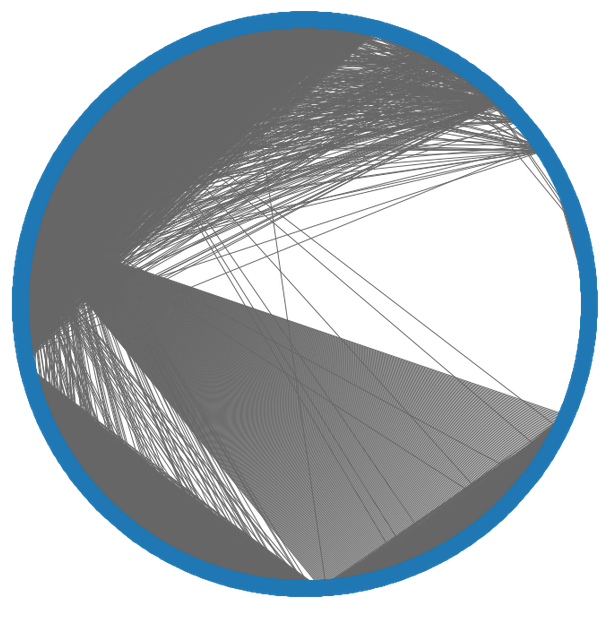 In this layout, we place the nodes randomly within an area. We draw the connections between the nodes with lines. The layout will help in understanding the random distribution of the network. We plot the layout using following code: The spring layout helps us understand if there are any isolated nodes in the graph. It also gives us clues on the number of connected components. The alpha parameter shows the color opacity for the node. We make the plot using following code: I will show you how to create customized visualizations. We will have node size changing with its degree. Thus, a node having many out connections will have a larger size. This will bring out the importance of such nodes. We will also use a different color for different locations. This will help us understand the locational distribution of the network. Likewise, you can customize the plot to bring out unique features in the network. The following code generates such a customized layout. 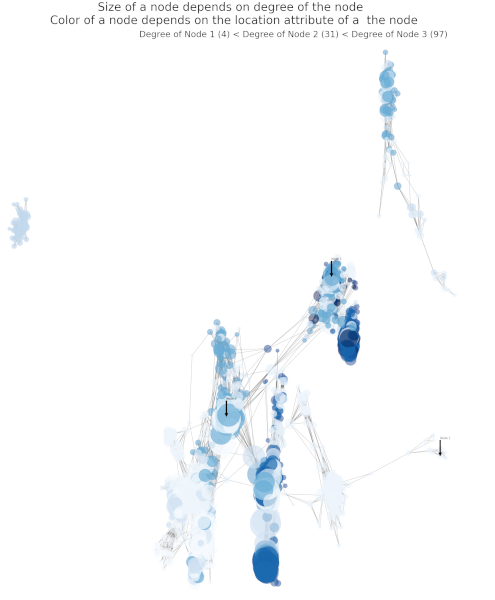 Observe the different node sizes that show its degree. The different shades of blue color point out the locational information.

From the above four charts, we can make a few following general comments on the network:

Thus, by using different visualization techniques, you will analyze the network topology. Such analysis is very vital in making recommendations and for a massively enormous network like Facebook, such visualizations carry lots of weightage in network analysis.

We will also save the graph and the new ‘fb’ dataframe created here, which we will be using in the next part of the project.

In this tutorial, you learned how to extract the required data from the network files to create a graph and visualize it with various kinds of plots. The NetworkX library helps us in creating network graphs and to create visualizations. This is the first step in social network analysis.

The network data is mostly unorganized. You learned how to cleanse the data and organize it for constructing a graph. The data processing includes selecting desired features, dropping unwanted items (nodes/edges/features), converting data to an appropriate data structure, and so on. After pre-processing data, you learned to create graphs using the NetworkX library. You learned how to add nodes, edges and attributes/features to the graph. Graphs with isolated nodes or nodes with a low degree gives low/bad link prediction scores. You learned how to remove such nodes. Last, you learned how to create different network plots, including your own customized ones. That’s about it. So go on, and try out some of these methods in your next Social Network Analysis projects, and if you are new to this topic, try learning and replicating the above to get an idea. Good Luck!

In the next part (Part 2), I will show you how to do the network predictions using Node2Vec.

Would you like to know the kind of a music that you just downloaded before listening to it? This trivial tutorial will show you how to classify any music into one of the standard categories, also known as genres.