Tweets probably use more erratic language than any other online text generation. People use all sorts of abbreviations, slangs, grammatically incorrect sentences, uncommon words, words not found in Oxford dictionary, and what not? At the same time, these tweets many times carry vital information that could be very useful to you even in saving somebody's precious life. You may still remember the doomed day of 9/11 (Terrorist attack on World Trade Center) or 26/11 (Mumbai terror attacks) when a single tweet might have alerted several to take a life-saving action.

Analyzing Twitter data for such vital information is a challenge due to the language people used while tweeting. You need to clean up the text to a great extent and also understand what they are trying to say, that is basically extracting vital information from the tweets. In this tutorial I will show you a few techniques of cleaning text data before we feed it to our neural network for Natural Language Understanding (NLU). We will use BERT ( Bidirectional Encoder Representations from Transformers) - a really powerful language representation model that has changed the NLP (Natural Language Processing) paradigm totally since last year.

Our words say much more than we might think. If we pay good attention to words, we might extract some great valuable information. In this tutorial, we will use the power of BERT for information extraction.

‘‘You can have Data without information, but you cannot have information without data.’’ - Daniel Keys

Any Machine Learning application cannot be developed without a proper dataset. Fortunately, for our purpose, twitter data is available at Kaggle site for creating our ML model. The problem that we are trying to solve is essentially a text classification problem. For text classification, we need natural language understanding and that’s where we will use BERT for giving us insights of a given tweet. After you train the model on Kaggle dataset, I will show you how to classify the real time tweets for a practical use. For this, you will learn how to capture a live stream of tweets and classify them instantaneously.

Follow along and create a new Google Colab project and rename it to Live Tweet Analysis. If you are unfamiliar with Colab, here is a short tutorial to get you started.

The Hugging Face transformers library provides an easy integration of Bert pre-trained model into your project.

To install this library, use the following pip command.

As using BERT requires heavy processing, using TPU is recommended. You can opt for the TPU usage by selecting the Change runtime type option in the Runtime tab of your colab project.

Then, follow the steps below to configure TPU on colab and set its distribution strategy.

You will see the following output:

The above output signifies that your project is running on TPU.

For your ready use, the Kaggle data is made available in my repository. Download it to your project using wget command.

Kaggle provides datafiles for training and testing. The testing dataset does not contain labels. We will use only the training dataset for model development. We will then use the trained model to infer live tweets.

Read the csv file using Pandas from the path created in colab which contains the downloaded file.

As you can see, the data contains five columns, out of which the text and the target column are required for our model development. You can check the number of datapoints by using the shape command - there are 7613 data points.

We will first check for the null values in the dataset.

The keyword column has only 61 nulls. To get an idea of what it contains, we plot the distribution of the most common words in this column. Use the following code fragment to plot this distribution: 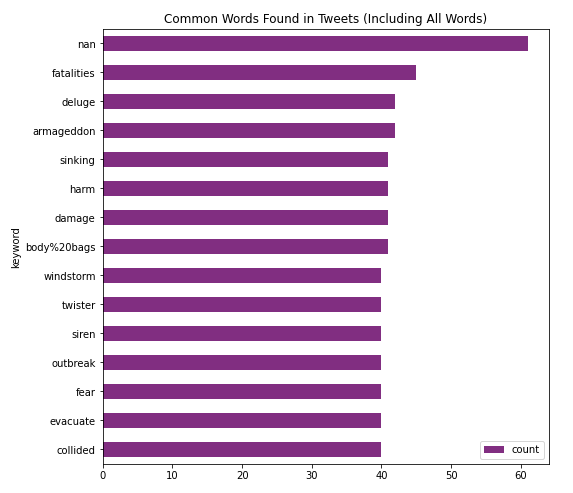 As shown in the output of train.isnull().sum(), a large number of records have null value in the location column. As such, this column is not useful for our analysis. So, we will drop it. Also, the column id is not required, as we have a default index in the data frame, provided by Pandas.

We remove all the unwanted columns using the following program statement:

We will now examine how many records in the training dataset are marked as “disaster?”

The output indicates that we have 4342 cases of disaster and 3271 cases of non-disaster, a good distribution for machine learning.

We define a function for cleaning an input text with several configurable parameters.

The clean function has various parameters that help in cleaning the given text in one go. The parameters are mostly self-explanatory. It fixes unicode errors, converts text to ASCII, lowercases the text, and removes line breaks. The clean function also has the ability to trace and replace every occurrence of url, email, phone number, digit and currency symbol with a special symbol, in our case we replace all such occurrences with a space. Set the language parameter as “en” for English.

We now call this function on the entire tweet data.

Next, let’s remove the stopwords from the text. A stop word is a commonly used word (such as “the”, “a”, “an”, “in”) that generally a search engine is programmed to ignore, both while indexing entries and while retrieving them as a result of a search query. As these words do not indicate a disaster or not-a-disaster, we will remove those from our analysis. NLTK (Natural Language Toolkit) in python has a list of stopwords stored in 16 different languages. We will be using this ntlk library to get rid of stopwords in the texts through the code below.
We have to first download ‘stopwords’ from ntlk.

Select stopwords in English out of the 16 different languages that ntlk supports.

Remove the stopwords from the training data using the following loop:

Like the keywords distribution that you checked above, we can examine the distribution of the most common words found in the tweets.

Convert the 2-dimensional array of words to 1-dim for easy counting of words.

Make a dataframe with words and their corresponding counts.

We will first sort the words in decreasing order of their instances and then plot the most occurring words using matplotlib. 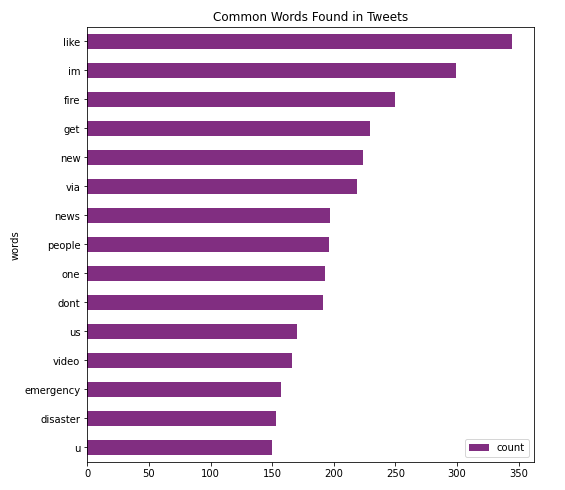 We will now feed this cleaned-up data to a BERT model for Natural Language Modeling.

We will write our neural network model where the first layer will be the pre-trained BERT model followed by our own network layers.

We write a function as follows for building the model:

In the above model, the transformer output is passed through a dropout to take care of overfitting, if any. We then pass the output through a dense layer with sigmoid activation. We create a model using the Model function with the appropriate parameter values for inputs and outputs as defined above. We compile the model with Adam optimizer and binary cross entropy loss function.

We use the bert-based-uncased pretrained model and pass it our above written build_model function for constructing our model. 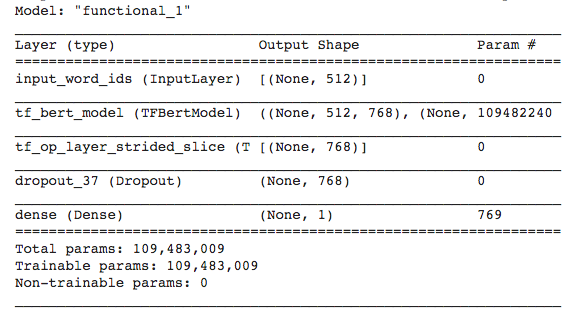 Notice the layers which we added to the output of the BERT layer. Next, we will tokenize the text data for model training.

We first tokenize all our input datasets - training and testing. You will use the BERT pre-trained tokenizer for this purpose. You create a tokenizer instance using the following statement:

Save the loaded tokenizer to your local environment.

Reload it with the Hugging Face tokenizers library.

You will be using this fast_tokenizer to encode our input. Next, we write an encode function that uses the above tokenizer for encoding the given text.

The fast_encode encodes the text to numbers so that it can be used for model training. Typically, it is used for getting tokens, token types, and attention masks. It outputs a dictionary of encoded text. We now use this encode function to encode our training and testing datasets.

We reserve 10% data for testing:

We create the training dataset using the following statement. The AUTOTUNE parameter prepares the next batch of data while processing the current one.

We train the model by calling its fit method. The strategy decides on the distribution strategy on the TPU cluster during training.

Each epoch took about 43 seconds during my training.

Now, as we have trained and developed the model, it is time to test its inference on the test data.

We use the predict method to do the inference on the test data.

We print the first five predictions:

The output indicates that the third tweet indicates a disaster while the rest indicate non-disaster. You may verify the validity of these predictions by reading out the first five tweets from the test dataset.

Checking out the accuracy with the predictions that we made on X_test and comparing it with y_test.

This gives accuracy around 79%, which is decent enough for us to continue further. Improving on the accuracy, we may need additional training data and playing around with dropout and a few more network layers.

Now, as we have trained and tested the model, let us try it out on some real-time tweets.

Twitter provides an API for accessing the live tweets. Install the tweepy Python client for the official Twitter API.

Import the following packages in your project. 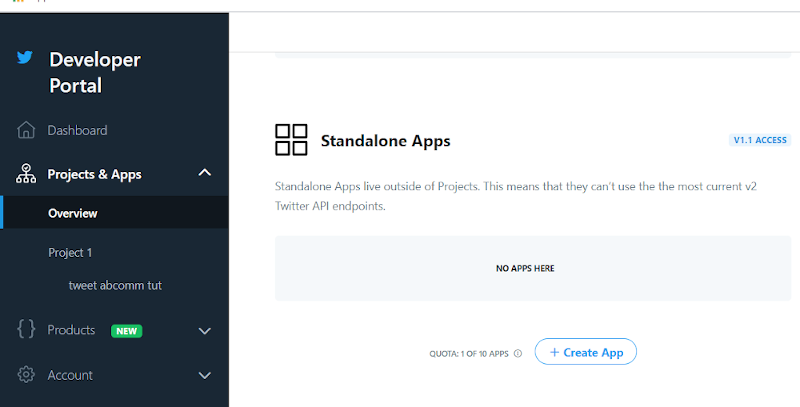 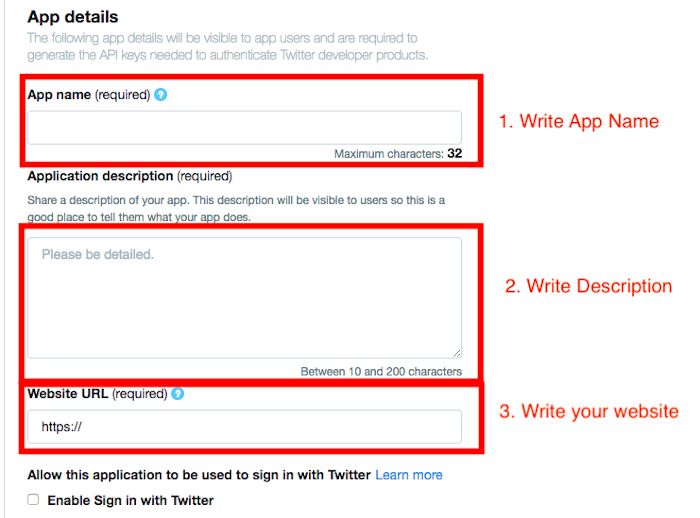 Fill the application details. You may leave the website url field empty. Once the app is created, you will be redirected to the app page. 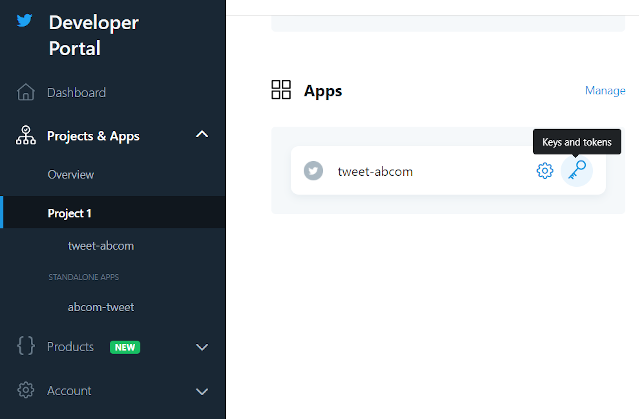 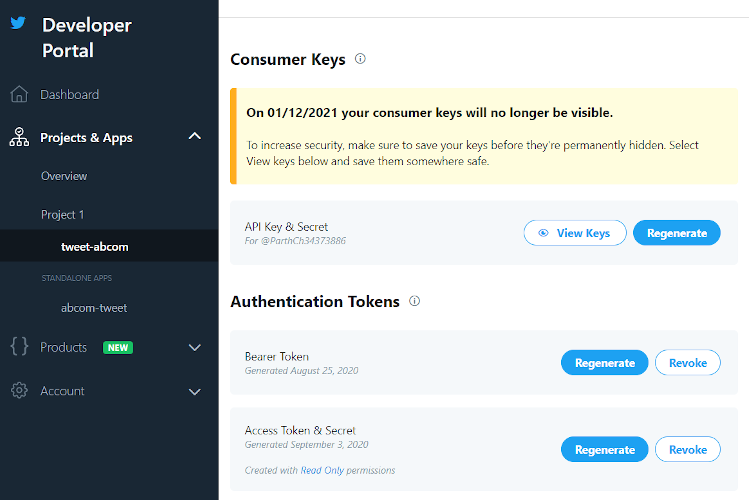 We will now define a few functions for capturing, preparing and classifying tweets.

Just the way, we tokenize the tweets in our training dataset, we need to tokenize the real-time captured tweets for making predictions on them. The function convert_lines accepts a tweet text as input and tokenizes its contents using the specified tokenizer.

The above process of tokenizing is exactly the same as what we did for the training dataset.

Then, we write a function for predicting the contents of a given tweet.

The function uses our pre-trained model and returns its prediction as a boolean value - disaster or non-disaster.

Lastly, we develop one more function for capturing live tweets from Twitter using our previously created tokens and keys. The function returns the original tweets that we load along with their class prediction that we get from the above written predict_disaster function. The function load_tweets is created as follows:

We will now put the whole development into the practice.

Set your keys and tokens from the Twitter Dev Console into the following variables:

Input any query and tweets regarding it would come up when the load_tweets function is called with your keys and tokens.

Now that the tweets are fully loaded and classified, we would like to see some results. 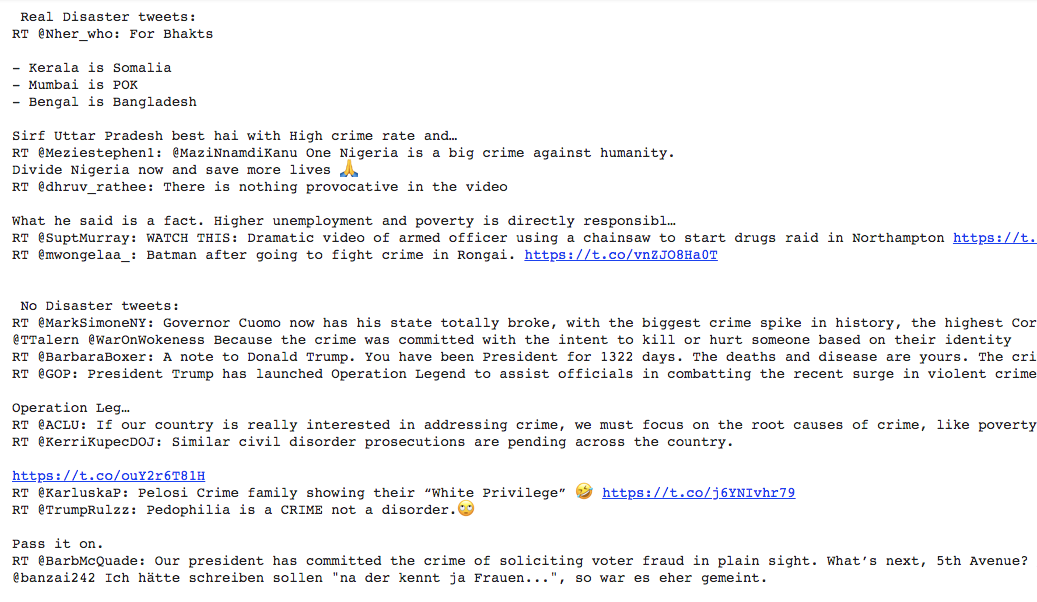 So, this concludes our creation of a Live Tweet Sentiment Classifier. Hope you liked it!

You may also like to look up our earlier tutorial - Detecting Slang Using BERT for a BERT Transfer Learning model.

Stay tuned for more such interesting projects in Deep Learning.

With plethora of online educational institutions offering career courses in Machine Learning, one gets easily confused. Dr. Sarang has more than 35 years of academic and industry experience, briefing you on the different fields of ML, and helping you choose the right learning path.

In today’s fast-paced world, a plethora of information is available at a click. With this, fake news is a rising concern in our society right now. Since most of the population uses social media to update themselves with news, delivering accurate and altruistic information is of utmost importance.