Have you ever wondered how to track, say, a celebrity or a politician in a real-time video? This is the case of tracking an object in motion in real-time. So far, in the first part of this tutorial, you learned how to detect objects of 80 different types using YOLO. The object detection was performed in a still image, a pre-recorded video and a live web stream. In the second part of the tutorial, you learned to segment the detected objects using Pixellib and mrcnn libraries. In this tutorial, you will learn to use another framework called DeepSORT for tracking a specific object in real-time. It means that if there are a group of people moving around in an open space or a garden, you will identify each person individually and track her motion until she leaves the garden (goes beyond the camera’s range.)

DeepSORT is a popular object tracking framework for tracking objects in real time based on the research paper by Nicolai Wojke, Alex Bewley and Dietrich Paulus[1]. It is an extension of the SORT (Simple Real Time Tracker). The principle on which it works is called Similarity Measure.

It records the distribution of features of a detected object in the current video frame. In the next frame, a Mean Shift looks for the new largest mode of distribution of these features. Thus, it is available to track the same object in the next video frame. It can also compute the relative velocity of the object using this technique. Note that if there are two objects, say two different persons in the current frame, the features distribution for these two persons will be different and distinct. Thus, it is possible to track each person individually. The key component of DeepSORT is the Kalman Filter[2], which helps to keep record of the positions and velocity of the object. It also helps in deleting the objects that were tracked a long time back, i.e. it assumes that the object has left the frame. I will now explain the cosine similarity.

What is Cosine Similarity?

Cosine similarity is a method to measure the difference between two non-zero vectors of an inner product space. We measure it by the cosine of the angle between two vectors and determine whether two vectors are pointing in roughly the same direction. We can find the applications of this in recommender systems, context similarity in text analysis, and so on.

This is how DeepSORT tracker uses NearestNeighbor with cosine similarity to classify whether an object is the same or different.

You will need to download a few files before you start the project implementation.

You will need to download the following files to your machine using the provided links. You had previously downloaded the COCO dataset and Yolo configuration files in the previous two parts of this tutorial series.

After downloading the files, rearrange all files in your project folder, as shown in the tree-structure below: 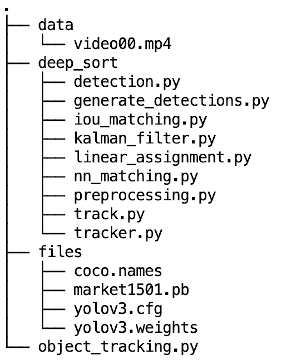 You may optionally delete the rest of the downloaded files.

Now, as you have set up your project folder, let us start with the implementation. Open a new Python file called object_tracking.py and add the following imports.

We will use the classnames used in the COCO Dataset. There are 80 distinct classes. Keep in mind that we will require this list throughout the tutorial, since we will use pre-trained models based on the COCO dataset. To know more about how to use this dataset, refer to the part I.

Next import the deepsort packages

Note: The next 3 sections are the implementation of object detection using YOLO v3. A detailed code explanation is provided in part I of this series.

First, we set up the DNN based on a pre-trained model.

We set up the DNN using OpenCV functionality with the downloaded configuration file and pre-trained weights.

Here are the definitions of a few utility functions. These functions are fully explained in the part I of this tutorial series.

The findObjects function gets the bounding boxes along with the class name and the confidence value of a detected object.

The detect function detects the objects in the specified image.

The following code is used for creating random color values for the bounding boxes.

Next, we proceed to setup DeepSORT

To set up the DeepSORT tracker, follow the steps below:

We will need an encoder for generating features from an image. This encoder is a pre-trained model provided in the gdet module. Initialize it using the following code:

We will generate a metric for calculating the distance similarity between moving objects in a video. We will use cosine similarity metric for this purpose, with a desired value for cosine distance.

Finally, initialise the DeepSORT tracker by passing the above metric.

Then, we write code for object tracking.

The following code allows the user to select between a pre-recorded video or a live webcam.

Detect objects in the captured frame by calling the detect method.

The function returns the bounding boxes, class ids and confidence values which are stored in three respective lists.

We get the class names for the above class_ids using following code:

Next, we iterate over each detected object and get the tracking id for the object and store it in the list indexIDs. Also, we get the coordinates of the object’s bounding box and generate a color for it.

Finally, we draw the bounding box and write the classname over the object.

We show the frame on screen and wait for the user to terminate the loop:

I ran the above program on the sample video shown here:

The output produced by our program is shown below. Note that all persons in the given video are individually labeled and tracked separately.

Here is another example of tracking a ball in the video.

Here is a self video on my webcam.

Modifications for TF2.0 and Scikit-learn

Note: Use a text editor which shows you line numbers, so that you can know where the changes should be made. One of the text editors which provides this feature is Sublime Text. I have added a few lines before and after, so that you can find out which part has changed.

In the deep_sort folder find the file called generate_detections.py, and open it in a text editor.

Note: This edit is only required for Tensorflow 2.x.

Note that since the library was built using TF1.5, we have added code to disable the TF2 code behaviour/syntax.

Note: This edit is only required for Scikit-learn versions above 0.22.

Done! Now you should be able to run this project with Tensorflow 2.x and Scikit-learn versions 0.23+.

In this tutorial you learned to use the new library called DeepSORT for detecting and tracking objects in real-time. You used YOLO v3 for object detection. After an object is detected, you obtained its features using a pre-trained model. You then learned how to set the metric for the DeepSORT tracker and subsequently use it to initialize the tracker. Ultimately, we saw how to put these all together and track the detected objects by drawing the classnames and tracking id over each object.

Do you want to mask out your face or a celebrity’s image in a picture? Learn image segmentation technique in this tutorial that will allow you to mask any object with a color of your choice and masking transparency. Do this for a still image, a captured video or even a live video stream.